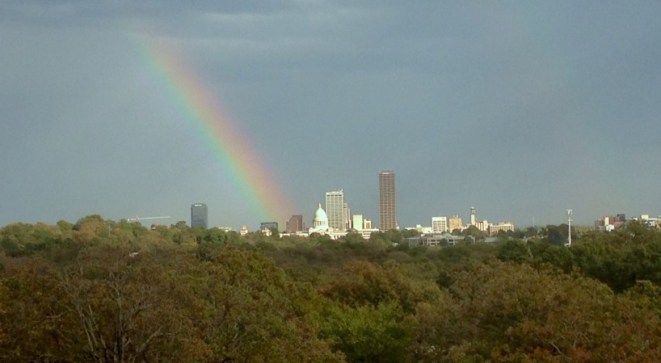 As I was walking into one of the labs today, I looked out the window to witness the picture above. It was one of the biggest rainbows that I had ever seen and the picture simply doesn’t do it justice. The colors were defined and it spanned a good portion of the skyline of downtown Little Rock (if you look closely, you might be able to see the second rainbow that is faint in the righthand side of the photo). It was one of those moments where you just need to stop for a moment and open your eyes to the beauty around you. I suppose that today was the day for witnessing beauty, for I took the opportunity at lunch to listen to the pianist play some beautiful songs in the bottom of the cancer building. This world truly is amazing and a wonderful gift that has been given to us by the Almighty. Think about it. He could have created a world without beauty, or our bodies without the ability to experience beauty. Though I would argue that this goes against the character of God, it is true that He had the power to do so. But I believe we enjoy beauty and art because God enjoys the same. We are made after His own image, after all. Why design a universe that is so spectacularly beautiful if this wasn’t the case?

Regardless, I suppose you have figured out what the rainbow today made me think about. The story of Noah is both sad and joyous, depending on where in the story you are reading. It is sad at the beginning, not for Noah per say, but for the entire human race. Sometimes I think we focus on the “kids story” aspect of the flood so much that we forget the deeper concepts. You could refer to this as the “adult” side of the story I suppose. We enter the story where almost all of mankind has forsaken the Lord and turned over to their evil passions.

“The Lord saw that the wickedness of man was great in the earth, and that every intention of the thoughts of his heart was only evil continually. And the Lord regretted that he had made man on the earth, and it grieved him to his heart. So the Lord said, “I will blot out man whom I have created from the face of the land, man and animals and creeping things and birds of the heavens, for I am sorry that I have made them.”
(Genesis 6:5-7)

Read that last statement again. Strong words from the Almighty! The wickedness of man grieved the heart of God, so much so that He decided that he would put an end to mankind. I can only imagine how heart breaking this was for God, as He had created man to be in a relationship with Him, given man free will in order that true love might be reached, and then mankind went the opposite way, turning away from the one who made it all. Fortunately, Noah found favor in the sight of the Lord. What kind of righteousness must Noah have had to live in a world so wicked yet still stand strong in the Lord. God, as He would do time and again in different capacities, would indeed save a remnant of man so that he would not utterly be destroyed. The story continues, as many of us know, where a flood was sent over all the earth after Noah built an ark for him and his family to survive in, cleansing the world of the wickedness of man.

After the waters of the flood subsided, the Lord told Noah and his family to be fruitful and multiply to replenish the earth. He then made a covenant with Noah that he would not destroy the earth with water again, signifying this covenant with a rainbow in the cloud. There are many times in the Old Testament that God uses a physical sign or symbol that the people can see or experience to show His presence. I believe this is because we often need something that is tangible to remind us of who we are and what we are called to do. The Lord told Noah that whenever He saw the bow in the cloud, He would remember His covenant with Noah and every living creature on earth so as never to destroy the earth with water again. It is truly amazing to me that today we can still look at a rainbow and remember the covenant that was made thousands and thousands of years ago. There truly is so much beauty in the word of God.

We too are in a covenant relationship with God through His son Jesus Christ. Peter draws the comparison between the story of Noah and our salvation through Christ in his first epistle.

“For Christ also suffered once for sins, the righteous for the unrighteous, that he might bring us to God, being put to death in the flesh but made alive in the spirit, in which he went and proclaimed to the spirits in prison, because they formerly did not obey, when God’s patience waited in the days of Noah, while the ark was being prepared, in which a few, that is, eight persons, were brought safely through water. Baptism, which corresponds to this, now saves you, not as a removal of dirt from the body but as an appeal to God for a good conscience, through the resurrection of Jesus Christ, who has gone into heaven and is at the right hand of God, with angels, authorities, and powers having been subjected to him.”
(I Peter 3:18-22)

When we put on Christ in baptism, we are entering a covenant relationship with Him, one that has been inaugurated with His blood that was shed as a ransom for many. In many ways, our memorials such as the Lord’s Supper are like the bow that God set in the cloud for Noah so that the covenant that was made on that day might be remembered forever. A wonderful covenant has been made between us and the Almighty, one that we could never deserve in light of our sins. May we ever look to the beauty of the earth and the memorials that the Lord has given us to dwell on His glory and praise Him forever more.

When you see a rainbow in the clouds, remember the covenant that God made with all living creatures that He would never again destroy the earth though a deluge. Perhaps it would be a good opportunity to share your faith with someone who hasn’t had the opportunity to hear the story of Noah in detail before.

Praise the Lord for the beauty of life.